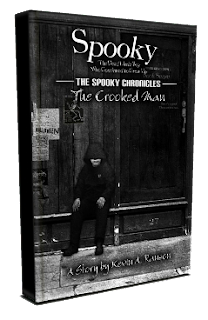 I don't particularly like children. Most of the kids that have slithered out of my womb have done so via vacuum cleaner hose attachment or coat hanger. So , yeah , not my thing.  However ,  if I where to ever spawn a child I'd want him to be just like " Spooky " the creepy little hero of Kevin A. Ranson's new young adult shockfest.

The Spooky Chronicles: The Crooked Man is the story of a young boy who becomes very ill with terminal cancer. As The boy lays on his death bed he is visited by a mysterious " crooked man " who gives him the oppurtunity to return to life. However , upon returning the young boy realizes that his mother was taken in his place and now he must endure his life as a " dead " boy , coining the name " Spooky" as his new moniker. Spooky soon begins to realizes that he has special abilities and that dark forces may be working against him and those around him.


I was very impressed with Kevin A. Ranson's new gothic fantasy . The story itself is written almost as if it where a dark fairytale  laced with underlying currents of malice and dread. Mr. Rason starts out slow and deliberate with Spooky's plightful existence and quickly sucks the reader in as we learn right along with the lead character his trials and tribulations and eventual decent into a world of darkness and magic. It isn't often that I enjoy , or even watch for that matter , any material that would even remotely be suitable for teens or young adults and Mr. Ranson has succeeded in creating a new and exciting entry into the world of young adult fiction. The Spooky Chronicles has the potential to become a major force if it stays dark and doesn't compromise any of it's wonderful characters and fairytale like atmosphere for cheap lurid thrills. I can't give enough praise to this creepy and smart story and to go any further into the details of it would spoil half the fun. Do yourself a favor my babies , go find a homeless child or steal one of the neighbors kids and cuddle up for a good ole fashion slice of genre fun.

The Spooky Chronicles is now available online http://spookychronicles.com/ via ebook and on http://www.smashwords.com/extreader/read/62108/4/the-spooky-chronicles-the-crooked-man. Please I beg all of you read this , it really is that good. Besides we can't spend all our days eatin' chicken and watching QVC..............

What do you think my babies ??